“Katja is the best German language teacher and coach. While on the young artists programme at Covent Garden 2013-2015, I prepared with Katja for two big lunchtime recitals including German Lieder at the ROH and a solo recital in Warsaw (Frauenliebe und Leben; Wesendonck Lieder), the “zweite Dame” (from die Zauberflöte) and Hänsel for Hamburger Staatsoper. Katja has not only helped me with the pronunciation of German, but also with character, how to sing in German (because she is a singer as well), style and the colouring of the language.

I have also studied the German language with Katja in order to be able communicate in German as I now live and work in Germany. Katja has her own unique system to teach which makes every session inspirational and enjoyable.
I highly recommend Katja for professional singers and for anyone who wants to learn to speak German. I will do all my German operatic roles only with her!”
Nadezhda Karyazina
Mezzo soprano, soloist at Hamburger Staatsoper

“Katja seeks to provide feedback that allows the singer to incorporate a more authentic pronunciation and inflection within the scope of the singer’s unique vocal technique, and this teaching style of hers is successful in empowering, rather than criticizing, the singer.” Read in full
Jacquelyn Stucker
Soprano, soloist at Deutsche Oper, Berlin / Royal Opera House, London

“Katja’s approach is fresh and engaging. She combines a linguist’s mind with a singer’s sensibility. Singer-friendly and clear communication.”

“Katja is a highly intelligent and enthusiastic coach and very popular with all who work with her. She has a keen ear and passes on her knowledge with warmth and humour.”
Mark Packwood
Music Staff, Royal Opera House

“It is Katja’s ability to apply German in a way that makes perfect musical sense, and that makes her invaluable to me as a singer.”
“I’m very grateful to her incredible patience when I don’t quite get the pronunciation right for the first time…or the hundredth time!”
Alish Tynan
Soprano 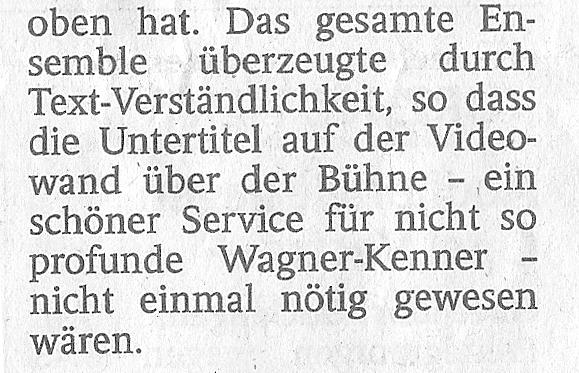 Schwarzwälder Bote newspaper review on the Parsifal production in Freiburg, April 2013, pointing out the intelligibility of the text of the entire ensemble.

“During the season 2012/2013, Mrs Katja Parmar has worked as a German language coach for the Theater Freiburg. While working very successfully with our foreign singers especially on “Parsifal” and “Lohengrin” as well as on the opera “Oscar und die Dame in Rosa” which will have its world debut in January 2014, Mrs Parmar has shown great personal commitment together with profound expertise and knowledge.
We very much regret that Mrs Parmar will be leaving Freiburg and wish her all the best for the future. She will be a great asset to any theater that is interested in having German repertory performed in a good and intelligible German.”
Thomas Schmieger
Head of Music, Theater Freiburg

“…it speaks for itself that for many of the young artists, Katja is the preferred coach/ teacher… .”
Siri Fischer Hansen
Jette Parker Yound Artists Programme, Royal Opera House, London